Learn how our essential services will continue to operate as we respond 'Together against COVID-19'.

COVID-19 UPDATE: From 1 June 2022, new conditions will apply to in-person social visits, these are outlined on this page. We encourage visitors to contact the correctional centre prior to travel, for operational reasons centres may need to cancel visits on short notice. Video visits continue to be available.

Department of Communities and Justice

The NSW Government is taking action to address the State’s growing prison population and reduce reoffending. 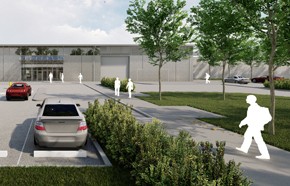 Over the past five years, a growing population, more effective policing and improvements to bail laws have placed increased pressure on the prison system. In 2016 the NSW Government announced Better Prisons, a program of reform and rebuilding that includes a once-in-a-generation investment in modern, secure, fit-for-purpose prisons.

The centrepiece of the program is a new Clarence Correctional Centre south of Grafton, expected to open in 2020. Clarence has been designed in partnership with the private sector to serve as the corrective services hub for northern NSW.

Across the State, upgrade work continues at our centres at Bathurst (pictured above), Cessnock, Goulburn, Parklea and Silverwater, as well as the John Morony complex at Berkshire Park.

For more information, or to provide feedback:

Return to top of page Back to top